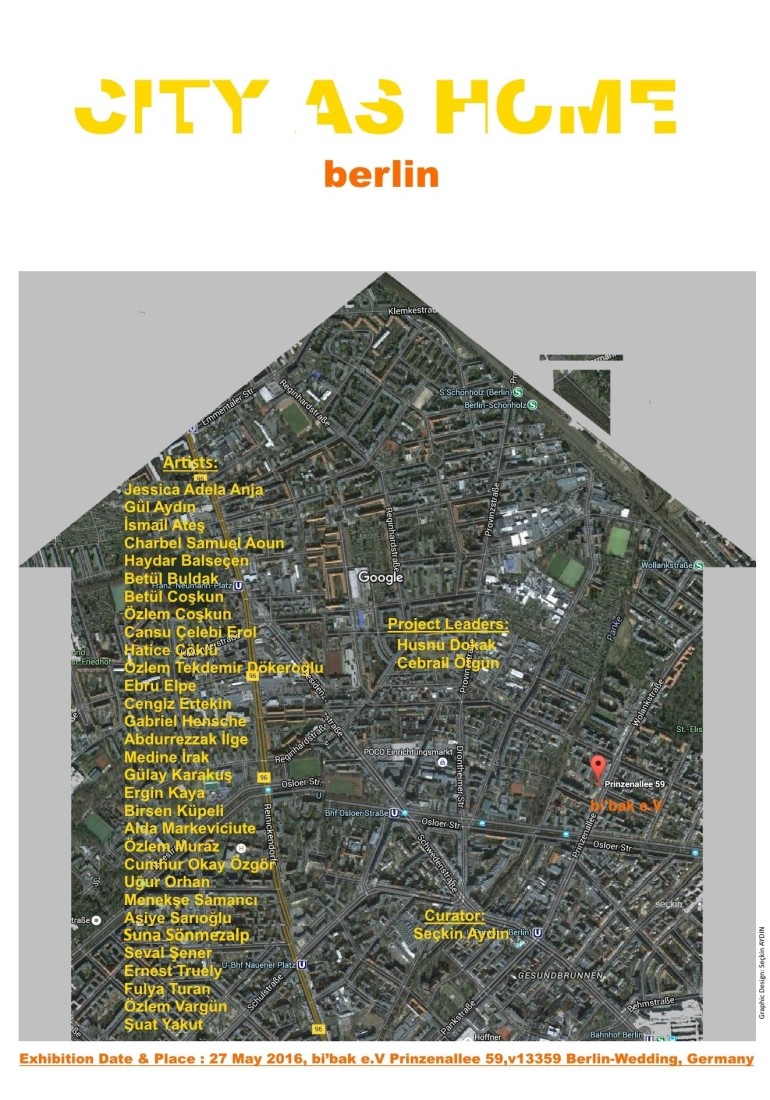 This project consists of artistic interventions that is composed of a city which transforms itself into its own space in which artists reside; temporarily or permanently; from its streets, stations, side-walks to its parks, at the actual space in real time.

The exhibition aims to animate home -symbol of privacy- outside of itself, in public. One’s privacy, which gradually exceeds outside of its borders, eventually fractures the public space as well. Besides the formal and informal rules, it is an individual’s redefinition of himself in / against society and the system, under a technology driven and controlled circumstances that dictates our daily life. It is an attitude from public sphere against the private. It is the re-domestication of the city which has been made ruthless by capitalism that is also ruthless itself.

In today’s world, besides the theoretical concerns of the contemporary art practices which aim to make the world a more habitable place in general, other types of symmetries on the possibilities of social life and practices are also essential and is put forward through the exhibition.

At the same time, we also consider a utopic world, where the possiblity of converting the capitalist modernity’s dominant community in favor of the societies. In this sense, addition of the democratic values of the nations and also the values of humanity, to the additions of all democratic gains of the world, history and society makes the contribution of artists essential and enriched.

In the reality of the global world; countries and cities, participate in the cultural scene as they claim in this regard. Also, financial, cultural and diplomatic alliances find an opportunity for discussion in an open platform. When looked at contemporary art, we can say that the last few decades have been the stage for such global mergings and compromise.

In this sense, the exhibition that will take place in Berlin. the project will deal with such issues. “City As Home ” project focuses on the question of how an individual can expand his social reality in a philosophical and artistic way, rather than a project that is merely focused on the nesting of the division of public and private sphere.

Planned to take place in Berlin, the project is designed in the form of three divisions within a period of nearly two years. The first part of this, the project “Once upon a space” took place in January, 2011 in Diyarbakir. The first aim of the project, in Marx’s words, is that a private space , home, is designed as an interspace. What this meant was to create an interspace that steps out of the dominant forms of production and distribution, yet, emphasizes society and humankind. Another approach to home settlement was brought to daylight. www.evvelmekanicinde.blogspot.com

The second step, “Existing from home – Resettlement”, was held by curator Seckin Aydin, December 2011 in the Czech Republic. The second section evaluated, what the individuals brings when he settles into a new home; what level his history and his society is, or, in his memory what are some things that transform this new habitat into his own, as well as what some answers are to such questions. www.inthehomyspace.blogspot.com

Now, we are planing to re-examine that 4th step with new artists in a new city. Besides, we would like to meet artists from Germany and make some collobrative works in the context of this Project.

By the project “City as Home; Berlin” , “we also plan to transform the city into a home, under a condition to be as comfortable as we can and to design it in a way that will free our spirits”.

In Charles Boudelaire’s sentences; “Being away from home, but still feeling right at home; seeing the world and being in the center of it, but hiding from it…”

THE ART OF WAİTİNG SPACES

There are diverse movements taking action with the criticism of system, in historical process and the present day. This movements represents a strong stance against. Their most obvious characteristic is the reflection of criticisms for psychological, political, social, and ecological situations through art and space. Because of activism is combined with art and creates artivism, namely activist art.

Looking at the history of humanit, discourses about life related with culturel and political changes in collaboration with age of enlightenment has found expression with art. Starting intensively with romanticism, these have exacerbated with futurists, dadaists, surrealists, constructivist and avant-gardists. No matter how it happens as a result of questioning action art comes along with awaken people as resistance against system. Art is life there is changing the world order. And the places is an element reflecting and putting into practice it.

The urban concept inholding a multicultural structure has a determinative climate which builds the process of the inversion of the cultural codes within its own dynamic toward a certain direction. While this inversion process reveals the loss of a set of paradigms that constitutes the society, the individual behaves in accordance with the mutual data within a restricted area.

This area, moreover, turns into a space where the power relations web develops; and where the individual is constantly recreated through the created truth regimes, discourse, problematising, and experience forms. In the space, the individual is deprived of a real communication with her/his existence; s/he is estranged to her/himself. The only truth via which the individual tried to be designed as an artifice can take a breathe is maybe to bring order into the caos as a creator and build her/his own reality through art.

THE CITY IS OUR HOME

Abstract: The city dweller spends most of his/her time outside home, in public spaces like streets, thoroughfares, work areas, shopping centers etc. This is why the city considered to be our home. Halls, rooms, apartments, houses are accepted as private spaces where access to public spaces are maintained through windows, doors, and gates. A flag or a poster on our windows or flowers we like to see in our balconies may turn into an aesthetic, artistic object, yet, such an object may disturb other city dwellers as well. Contemporary art aims at adressing masses; it attracts attention by being and living in the real cityscape. One of the functions of artistic activities is to evoke reaction. While trying to make the city our home, we touch upon the living spaces of other city-dwellers. In this respect, the conceptual impact of artistic activities should be taken into consideration together with their effect on the social and physical aspects of the city.

The name of the life in streets: Farah.

A three-year-old kid looking us with happy eyes among cars in streets rather than being at home.. and streets are home for children like Farah. Despite the bad conditions, these people have held on to life with passion. They got used to living in streets. They have showed decisiveness in maintaining their lives in these streets with hope more happily than others who have any kinds of opportunities. Mosques, churches and streets, the house of God, belong to these people. Witnessing this migration and this compulsory life in streets is a shameful situation for humanity.

The most saddening fact is that the people whose countries have been occupied migrate to other countries under difficult conditions and try to sustain their lives in streets of those countries. Isn’t it a sign of their passion for living in any conditions? Even when they are humiliated and shoved there…

Is it possible for the communities that have failed to create their own social living areas to build a new life for Farah and others who experience unusual conditions? People in the streets retreated to their houses. They started to find streets unsafe. They started to look out from behind the closed doors. They have been isolated from streets. People that consume and slowly give up producing in a capitalist system disregarded people who have made contributions to recycling in streets. They started to fear to encounter the people who collect their garbage.

Streets have become homes for people who have already lost whatever they might lose.

When arguing over “the city”, American architect Frank Lyord Wright who is assumed as one of the pioneers of the modern architecture suggests the modern construction is a sole big thing, not the summation of many small things contending with each other as in the past. Moreover, Wright mentions about the necessity of designing constructions in a form they are to serve the humanity and society best. The principle of architecture he underlines is to avoid everything non-functional. Every architectural construction in the city ought to realize a purpose being helpful for people and suitable for practical use.

A significant part of present-day architects and urban designers following Wright have been applying the same principles more or less. Present-day modern constructions consisted of abstract forms by their nature cause a rigid metallic uniformity, a mechanization oppressing people and organic beings and an aesthetic deprivation alongside their attribute of facilitating urban life. Michel Foucoult pointed to this negative through making “Panopticon” designed by Jeremy Bentham in 1785 a current issue again.

I am a Stranger
Fulya Turan
Bulldozers came to our cities and from the moment we step outside our homes,  we are on strange lands. Our cities now belong to another time and another community with its postmodern, eclectically and kitsch structures. The houses we were born in, the schools we have studied at are demolished and our memories have been erased. The cause is claimed to be terror in one city, earthquake in another. In the end, the society engineering and trade surplus made us strangers to our homeland. We are trapped inside our homes. Now, in order to be able to say that my city is my home, it is a must to go out, but to be participative and free before everything.
Then we shall respect to each other and shall not fear. We shall learn each other and become rich while we share. If we manage to say that our city is our home, only then we shall be one big family.

THE PHENOMENON OF MIGRATıON AND URBAN IN GÜLSÜN KARAMUSTAFA WORKS

Urban makes possible to human displacement himself. Urban changed the people in the host, transforming and shaping of one of the main elements of the environmental factor due to cost carrier is an important area in terms of cultural and political parameters. In Turkey, in the late seventies and early eighties experienced large migration from rural to urban has reached dramatic dimensions, efforts need to be integrated into urban life has been the main

driving force that changes people. In this research is intended to describe the reflection of the change is caused by the migration of the migration process and results, those left behind and the pains suffered by the city fund through works of Gülsün Karamustafa. Gülsün Karamustafa is an important figure because of the contribution he made to the development of the modern art movement from the 1980s that has become a new artistic language in Turkey. Gülsün Karamustafa was born in 1946. Karamustafa carried the subject to her works that are belonging, identity and universality along with the migration is forced to experience throughout life, lived in this migration process and the results were generally caused by migration. She has shaped her works the axis of the issues migration, urban and identity with multidisciplinary postmodernist approach to construct video, painting, photography, installations and objects in one space. Artist makes visible the traumatic experiences caused by the movement of people moving towards the city from the countryside, the drama of Immigrants, images of people wandering with movies, kitsch material while performing work space and goods are brought together in an eclectic way.